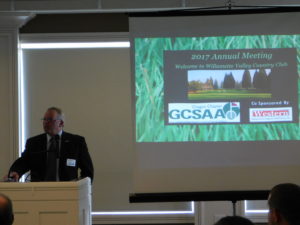 The 2017 OGCSA Annual Meeting was held at the Willamette Valley Country Club on Tuesday, May 23rd. The day started with our annual OGCSA business meeting. OGCSA President Chuck Wolsborn called the meeting to order and presented the 2016 meeting minutes for approval. Committee reports followed with Chuck giving a president’s report on the 2016-2017 board year and reported on financials. Vice President, Scott Larsen gave a golf committee report. There was no old business addressed and under new business the membership voted on and passed the by-law amendment to change the Class SM membership to Class B membership. The results of the 2017-2018 board elections were announced and are as follows: 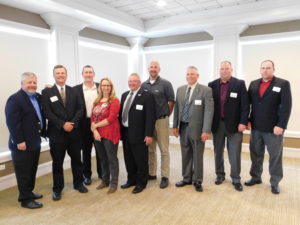 After a short morning break the keynote speaker, Chris Tritabaugh, Superintendent at Hazeltine National Golf Club took us through the incredible journey of his experience hosting the 2016 Ryder Cup Championships.

Concluding the meeting was the awards and scholarship ceremony. The Superintendent of the year award was presented by Chuck Wolsborn, the 2017 recipient of this award was Scott Larsen- Emerald Valley Golf and Resort. 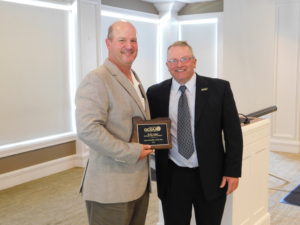 Next the Assistant Superintendent of the year award was presented by Scott Larsen, the 2017 recipient of this award was Kyle Bernards- Gresham Golf Course. 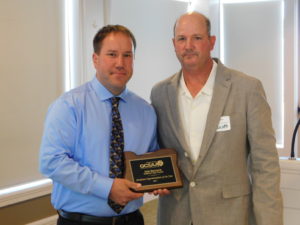 The highlight of the day was ‘hands down’ the induction of longtime OGCSA member Superintendent, Robert ‘Bob’ Senseman to the OGCSA Hall of Fame. Scott Larsen presented this award with the addition of short speeches from: Russ Vandehey, Stan Presley, Rod Nelson, Gordon Kioyokawa, and Tom Cook.  This was a moving and entertaining tribute to Bob and his career and service to the industry. Congratulations Bob! 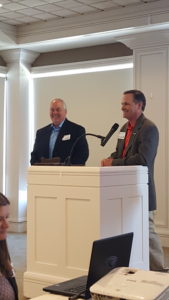 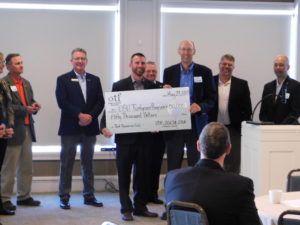 After the meeting, Jeff Komer, organized several members for a fun afternoon of golf. Thank you, Jeff!!!! Winners of the 9-hole competition were:

Once again thank you to Willamette Valley CC staff and Superintendent Larry Raschko for hosting us!!!