It is with deep sadness that we share the news of the death of longtime OGCSA member, Harvey Junor. Harvey served as OGCSA President from 1964-66 and was the Superintendent of Portland Golf Club for his entire superintendent career from 1957-1985.

The following obituary is posted with Dignity Memorial and can be viewed at www.dignitymemorial.com

Harvey B. Junor, (96), passed peacefully in his sleep on January 6, 2017. He was born on May 6, 1920, mid span on the Ross Island Bridge. A lifelong resident of Portland, Harvey attended Beaverton High School, and then worked at the shipyards in downtown Portland. As World War II began, he enlisted in the Navy where he served 4 years in the South Pacific. After the war, he went to work for his father at the Portland Golf Club. He soon met and married his wife of 64 years, Mabel Marie Caldwell. He eventually replaced his father as superintendent where he remained until his retirement in 1985. The Junor Family has a rich history as part of Portland area golf. His grandfather and great uncles came to Portland from Scotland in the very early 1900’s and joined the staff at the Waverley Country Club. Harvey’s father moved to the upstart Portland Golf Club in 1916 where he assumed duties as their first superintendent. Harvey became their second Superintendent shortly after returning from the War. A scratch golfer himself, Harvey was instrumental in preparing PGC for such PGA tournaments as the PGA Championship of 1946, the 1947 Ryder Cup, the 1955 Western Open, the Alcan and the 1982 US Senior Open. In addition to golf Harv loved the outdoors, fishing, crabbing, boating and spending time with his family and friends. He particularly loved spending time with his grandchildren. Harvey was preceded in death by wife, Marie, in 2014. He is dearly missed by his children, Sharon (Koch), Doug, Tom, Nancy (Puro) and seven grandchildren. The family asks that in lieu of flowers, contributions be made to the Providence Medical Center Hospice Fund. 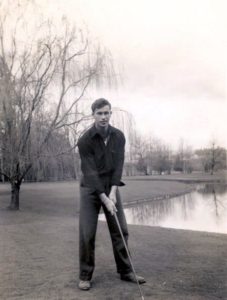 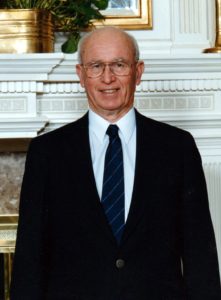