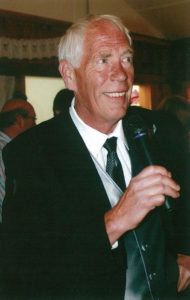 It is with deep sadness that we share the news of the passing of longtime OGCSA member, Mark L. Snyder. Mark was the Golf Course Superintendent at Salishan Lodge and Resort for over 20 years and served as OGCSA President from 1989-90.

The following obituary is posted with the Lincoln City News Guard. To view obituary and leave a memory for the family CLICK HERE

Mark L. Snyder, 70, of Depoe Bay passed away on October 18, 2017. Mark was born in Eugene, Oregon on January 29, 1947 to Lowell and Alice Snyder. Mark grew up in Toledo, Oregon with his parents and two sisters. He graduated from Toledo High School and later graduated from Southern Oregon State University.

Mark enlisted in the US Coast Guard and served in many locations but his last deployment was the Coast Guard station in Depoe Bay where he met his future wife, Susan “Suzi” Robison. They were married in 1973. They welcomed two beautiful children Grant and Lauren into their family and were involved in their community, school and the Congregational Church in Lincoln City. Mark always put his family first and had a kind word and smile to all those he met.

Mark was proceeded in death by his parents and sister Christine. Memorial gifts may be made to Peace Village Inc. c/o Rev. Charles Busch, P.O. Box 633, Lincoln City, OR 97367. Arrangements are being entrusted to Pacific View Memorial Chapel.